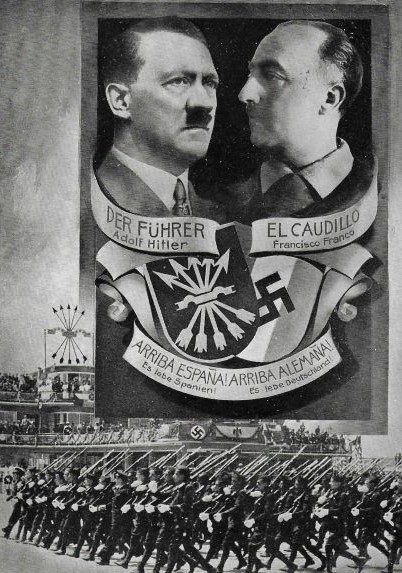 Hitler became one of the first allies of General Franco

After the military coup of July 1936, General Francisco Franco became one of the main leaders of the insurrection in Spain. He needed military assistance and, most urgently, planes to transport the rebel troops from the Spanish colonies in Africa to Sevilla (Seville) in the Iberian Peninsula. In their aim to overthrow the Spanish Republic, the rioters were not going to get any assistance from European democratic governments. Therefore, they asked three western European totalitarian governments of the time—Hitler’s Germany, Mussolini’s Italy, and Oliveira Salazar’s Portugal—for help.

With the help of Alfonso XIII, exiled in Rome, the coup leaders, José Sanjurjo and Emilio Mola, had contacted Mussolini after the February 1936 elections. Mussolini, who aspired to control the Mediterranean and create a new Roman empire, had agreed to assist the coup plotters. However, when he was notified in July that “a certain general named Franco” had risen up, he hesitated; General Sanjurjo had died and Mussolini had not negotiated with Franco, nor did he know him. Mussolini did not fully decide to support the coup plotters until he heard, in August 1936, that the French and British governments were willing to sign a non-intervention agreement regarding the conflict: this guaranteed the victory of the coup plotters, since while the Republic would not receive any military assistance, the rebels would be fully supported by Fascist Italy and Nazi Germany.

After the signing of the Treaty of Versailles in 1919, Germany had lost all its African colonies, so that while the rest of the European powers were experimenting with new bombing systems and techniques in their African and especially Middle Eastern colonies, German pilots lacked combat experience. Hermann Göring became one of the most determined apologists for assisting the Spanish plotters in Germany since, as the minister of the air, this war would give him the opportunity to become the second strongman of Hitler's regime, and his successor. By launching a terror bombing campaign, which in his opinion was "the most National Socialist way of waging war," Göring would achieve his goal by early 1938.