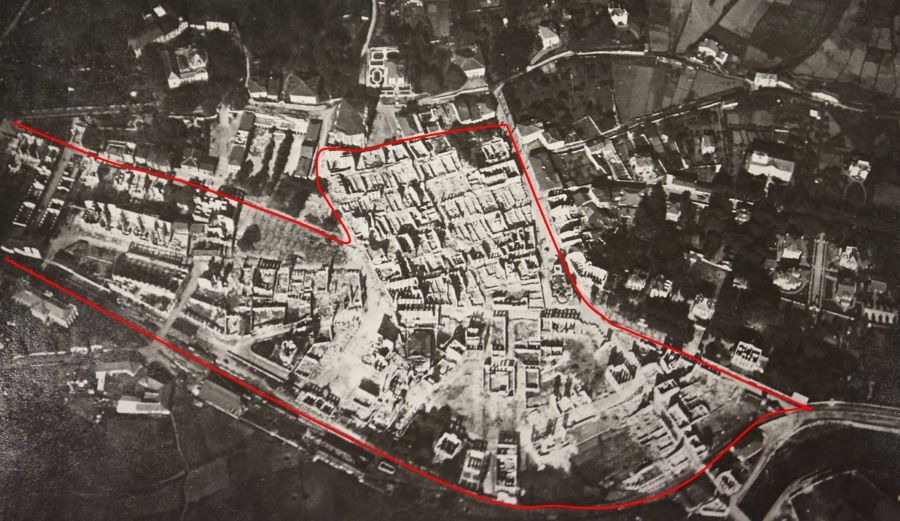 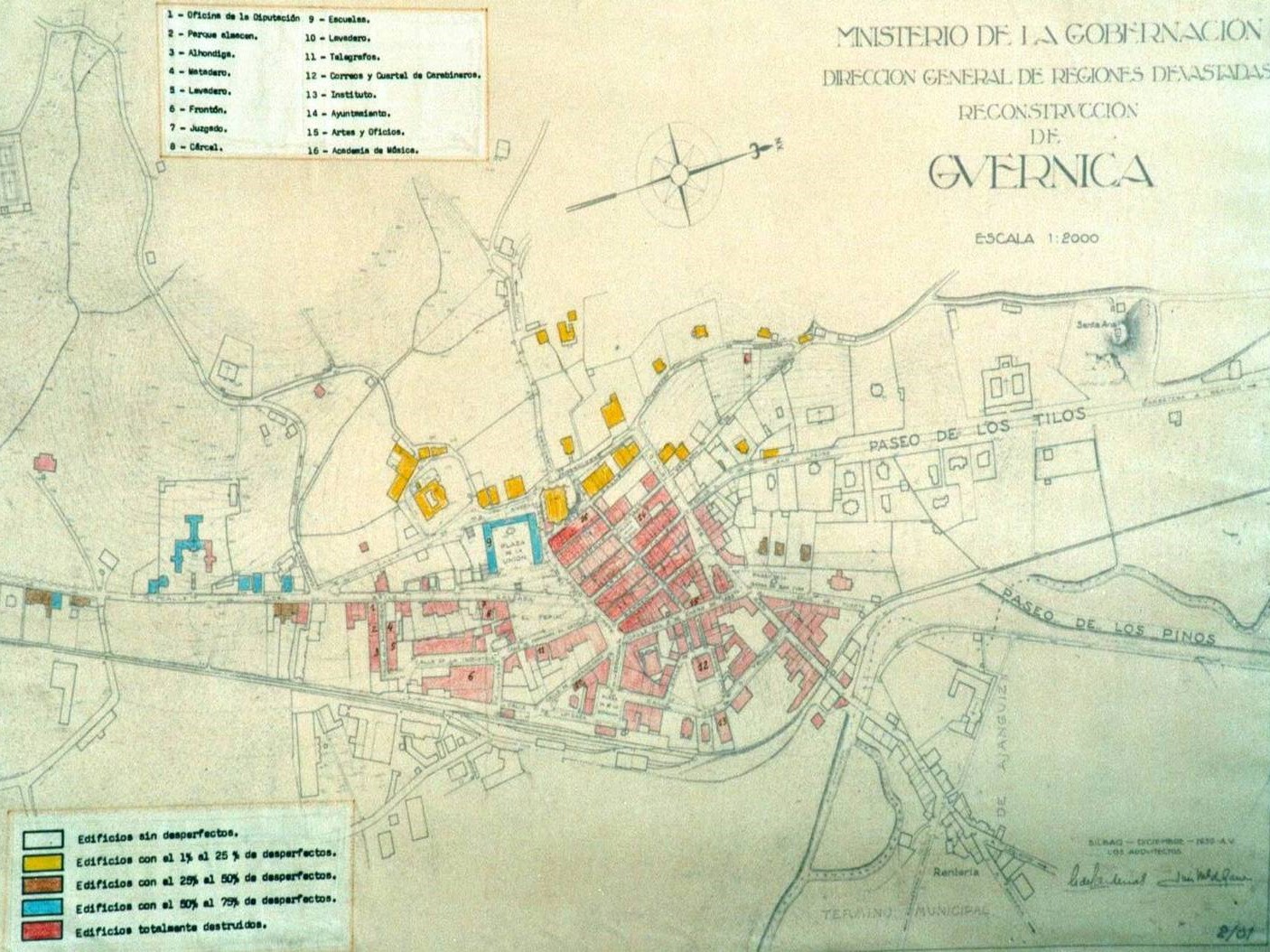 Above: Aerial photograph of Gernika after the bombing. This photograph, taken by an Italian reconnaissance aircraft, proves that the bombing was surgical: barely ten meters from the line in red to the city center, everything was destroyed, while ten meters to the outside of said line, the industrial sector

The city center, an area less than one square kilometer, was totally razed. Over 85 percent of the buildings—a total of 271 edifices—were completely destroyed, and only one percent were not affected by the bombing. The incendiary bombs started a fire that could not be put out for several days. In line with the concept of terror bombing, the weapons factories and the Errenteria bridge, the only strategic objectives in town, were not touched by the bombs or the machine-gunning.

The Basque government registered 1,654 deaths. The mayor of Gernika at the time, Jose Labauria, further stated that 450 additional people had lost their lives in the Andra Mari shelter. Together, these make up a minimum of 2,000 deaths. Father Eusebio Arronategi, who, like Labauria, was in Gernika during the bombing and the following days (helping with the rescue effort and identifying the corpses), said that he saw "thousands of his fellow citizens suffocated, killed, and injured." Forty eyewitnesses, including all the international reporters who came to Gernika, seconded these figures. Based on the figure of 100 deaths, proclaimed by the rebel authorities in a 1938 report, several authors today still defend that, indeed, no more than 100 to 300 people died in Gernika. However, there is no piece of evidence that supports those numbers, and every single eyewitness who testified in 1937 mentioned more than 1,000 deaths.

However, we can only know that the deaths were more than 2,000. The total number of fatalities is difficult to ascertain because the more than 60,000 m3 of rubble would not be removed from the city center until the end of 1941. The Franco regime never officially recorded any deaths and in fact tried and managed partially to eliminate the records prepared by the Basque authorities, thus erasing even the memory of the victims. 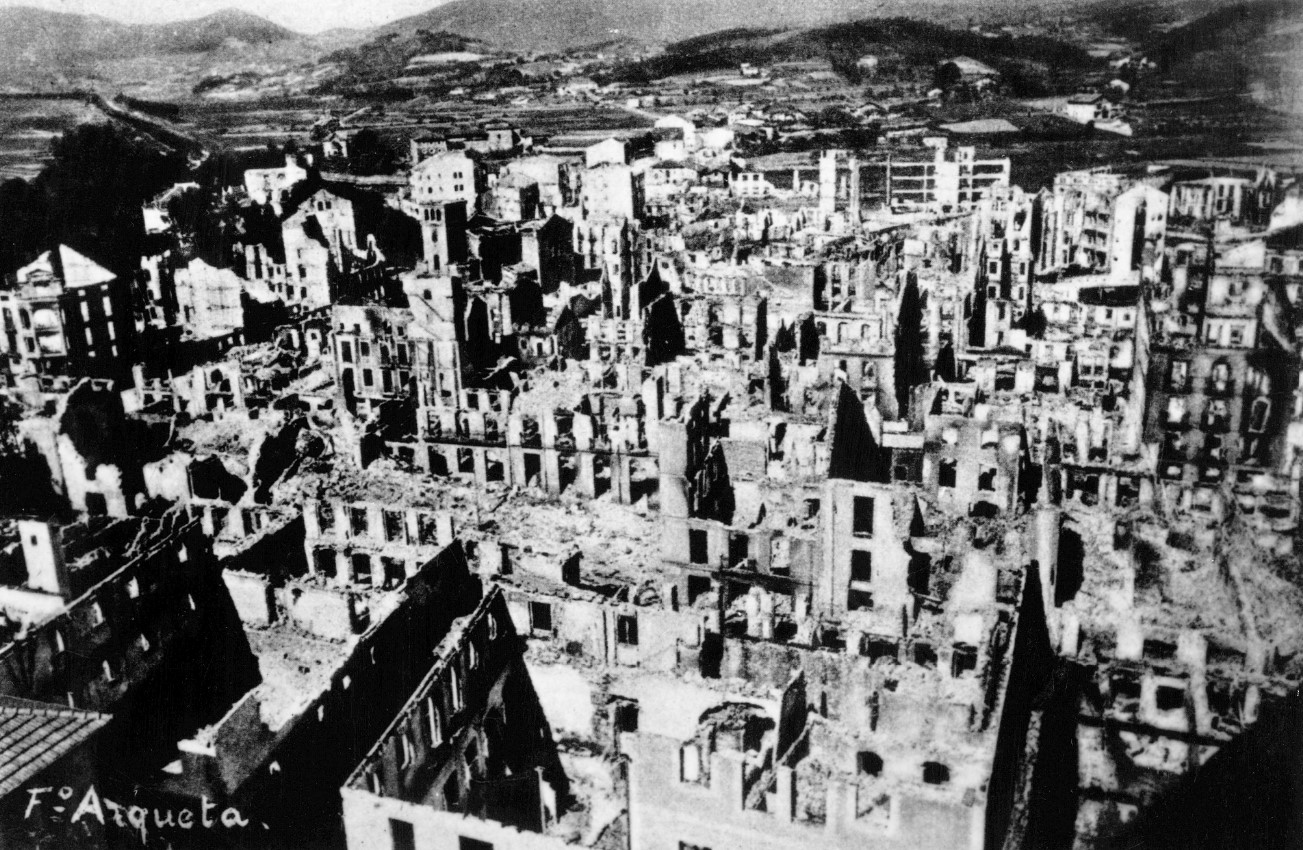 “It was close to eight. The planes would not return. There was no need. Gernika no longer existed. With all the first aid material that we had, we went to the city center to do everything we could to help the people. But even walking was difficult. Everything was rubble and it was hard to recognize the streets. There was fire everywhere and the walls were collapsing. Everywhere you looked, you only saw destruction… The worst thing was the cries of the people, people asking for help, help to find their relatives… help to unearth a relative or an acquaintance buried under tons of rubble” (testimony of the gudari Joseba Elosegi)

“I returned to Gernika the next morning. It was gray and cloudy. Some of the fires were burning and there were smoldering pockets of fire in various places. I went down San Juan Street and saw the body of Felipe Bastarretxea under the Errenteria bridge. He was lying on his back, near a small boat. I crossed the bridge and continued down San Juan Street. When I got close to the shelters, I could hear the screams of the people coming from them. There were still some people alive under the rubble. There were mountains of debris on some of them. It would have been impossible to get them out. I would rather die than see that horror one more time” (Francisca Arriaga's testimony)

“I joined those who were working, but it was useless. We could hear people, under the rubble, calling out to us and weeping, and we worked as hard as we could. But there was too much debris on top of them and the fires were growing in size and getting closer and closer. Finally, we had to abandon them. At that moment, I almost went crazy” (testimony of the gudari Sabin Apraiz)

“It was a Dantesque site. We found children next to piles of rubble. When asked where their parents were, they responded sadly, pointing to the mass of rubble: "There." It was something tremendous” (testimony of José María Picaza, responsible for the evacuation of Gernika) 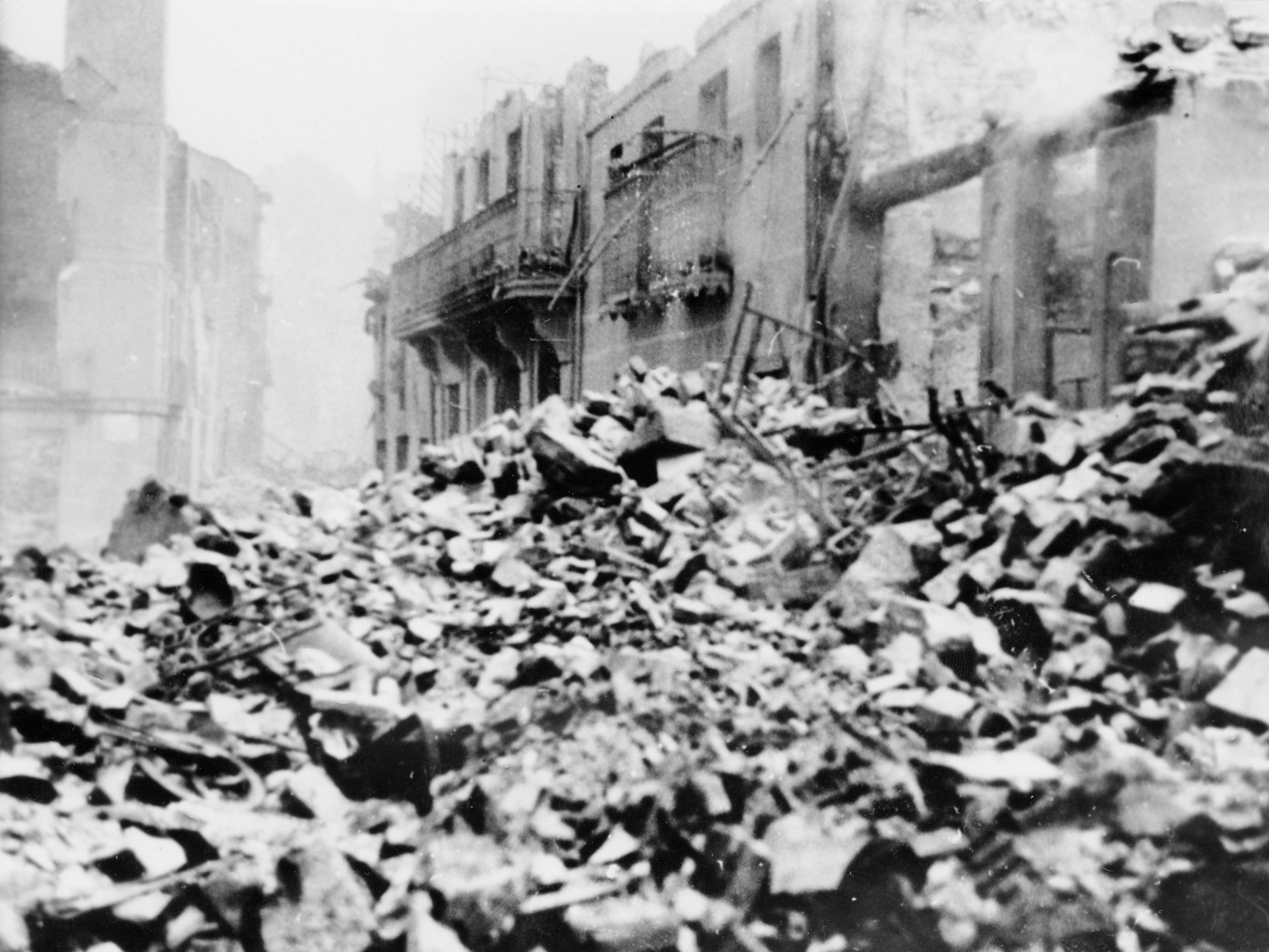 The reconstruction works did not begin until February 21, 1939, almost two years after the bombing, and by December 24, 1941, not even the city center had been completely cleared. In total, 60,388 m3 of rubble were removed. The Devastated Regions report stated that 271 buildings were “totally destroyed,” which means that the bombardment destroyed 85.22% of the total number of buildings in Gernika in their entirety. The report concluded that 99% of the town’s buildings were damaged to some degree. More than 2,000 people died, but the Francoist authorities never registered a single body under the ruins of Gernika, and furthermore they indicated that about one hundred people had died in Gernika—a lie that continues to be repeated to this day.