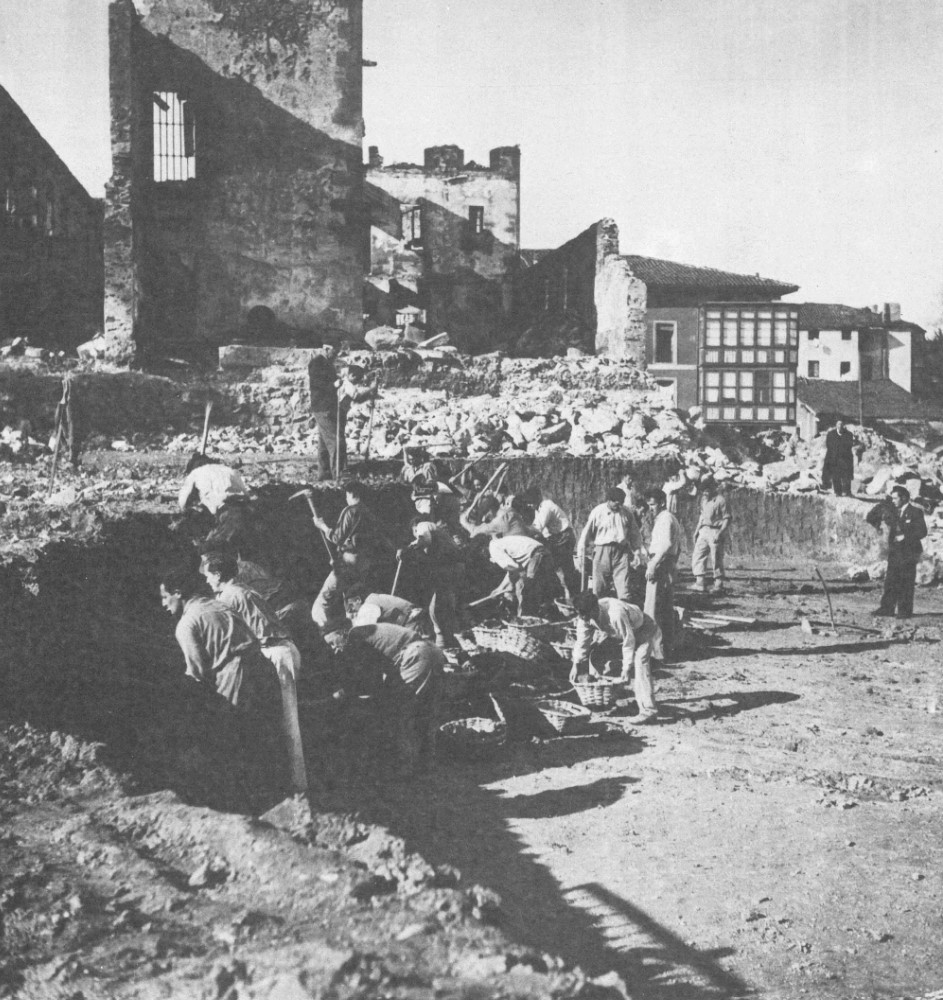 Prisoners of war working on the reconstruction of Gernika

The regime used the reconstruction of Gernika as a means of propaganda. A propaganda leaflet of the Francoist dictatorship reads: "Let us drown so much evil (the assertion that Gernika had been bombed) with the maximum good that is goodness, truth and justice." This is how Franco became “the architect of peace.”

In August 1939, the Council of Bizkaia commissioned the sculptor José María Garrós to make three wooden crucifixes with wood from the tree of Gernika to be given to the Pope, to Franco, and to the council's own session hall. During the ceremony of reception of the cross, Franco, on October 21, 1939, granted Gernika the benefits of an "adopted town" for the purposes of reconstruction. This way Gernika was “adopted” by the person who had ordered its destruction.

The works of reconstruction were overseen by the General Directorate of Devastated Regions dependent of the ministry of government. As stated in the report by the General Directorate’s architect, Gonzalo Cárdenas, Gernika had in April 1937 a total of 318 buildings, of which 271 were completely destroyed during “the fire,” and all the others affected to a different degree. The 271 houses destroyed by the bombing of Gernika represent 85.22% of the buildings in the town and 67.58% of the total number of buildings destroyed in the whole of Bizkaia (excluding Bilbao) during the war.

The National Service for Devastated Regions estimated the value of the buildings destroyed in their entirety to be 11,940,791 pesetas. This represents 34.1% of the total expenses produced by the damages suffered in Bizkaia as a whole (which amounted to 35 million), not counting those in the capital.

The widening of the streets made it necessary to carry out expropriations, which was suffered by those families who, because they were exiled or were considered “not adept” (mostly Basque nationalists), lost the right to request any compensation for their loss.

All the work of debris removal and reconstruction were carried out by prisoners of war until 1945.

On February 13, 1946, Franco was named Gernika's "adoptive son" and so the person who “had adopted” Gernika became its “child.” In commemoration of Franco's "thirty years of peace," on January 29, 1966, the city council awarded the dictator the diamond medal to the merit of Gernika.

After ten years of reconstruction, all rebuilt houses in Gernika were auctioned. The former owners who were lucky enough to have the right to request their former houses had to pay for them. All the money from the “Gernika auction” went to the central Spanish government. Obviously, corruption was rampant.

In 1949, the mayor the town, Vicente Rojo, forced the owners of burial chambers or tombs with inscriptions in Basque in Gernika to remove them and replace them with other ones written in Spanish.