Strategy of the attack 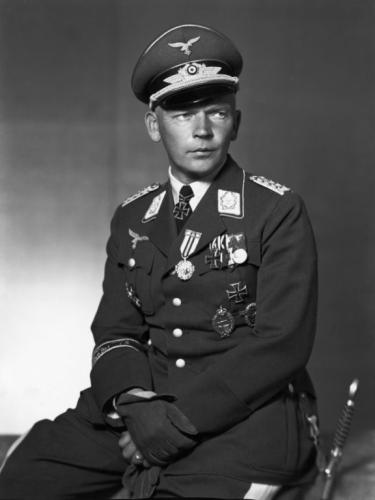 Wolfram von Richthofen, the architect of the bombing of Gernika

Gernika was the first town to be bombarded:

This bombardment was a perfect testing ground for the newly created Luftwaffe, the German air force.

Several authors still defend that the target of the bombing was the destruction of the small Errenteria Bridge, aiming to prevent the withdrawal of the Basque troops toward Bilbao. However, the disproportionate force of the attack, and the activity of the fighters machine-gunning civilians for three and a half hours, indicates that it was a terror bombing operation with the intention of completely destroying Gernika. The destruction of the “holy city of the Basques” would demoralize the troops, discourage the civilian population, and precipitate the surrender of the Basque government, prompting the subsequent fall of Bilbao and its heavy industry.

The bombing of Gernika took place on Monday, April 26, 1937, market day. Even if the population were conscious that there was a certain danger of attack, no one expected that Gernika could become the target of an attack of such a massive scale as the one that took place that day. Therefore, the market was held as usual and, although it is difficult to calculate, the number of people in Gernika at that time was between 10,000 and 12,000, mostly civilians.

At 4:20 p.m., the bells of the church of Andra Mari alerted the population of the arrival of enemy planes. Most of these aircraft belonged to the German Luftwaffe (renamed “Condor Legion” in 1937), and to a lesser extent to the Italian “Aviazione Legionaria” (Legionary Air Force).

The airfields that served as bases for the bombing were those of Gasteiz for the fighter planes, and those of Burgos and Soria for the bombers.

After the warning, the citizens of Gernika ran to protect themselves in the different shelters that had been built, where they stayed for almost four hours until the bombardment ended. It was an incessant attack with hardly any intervals between the different waves, and was planned using the following tactics:

For forty minutes, between the first and second wave, the fighters and the ground attack planes flew in a circle, preventing anyone from escaping from the urban nucleus, in order to keep everyone within the “circle of fire” of downtown Gernika.

The first bombs dropped were breaker bombs, weighing between 50 and 250 kilograms, to destroy buildings. The bombs broke the roofs and detonated two seconds after falling to the ground, which, in the case of the 250 kg bombs, caused the complete collapse of the buildings. Thus, they exposed the entire wooden structure of the houses.

Next, the bombers dropped the one-kilogram incendiary bombs. These bombs contained an alloy of magnesium, aluminum, and zinc that, when in contact with other metals, reacted and caused an uncontrollable fire and temperatures of more than 1,500 degrees Celsius. Consequently, a huge fire broke out in Gernika, which could be seen from villages many kilometers away.

Shelters became a deadly trap. After receiving two direct hits with 250-kilogram bombs, the shelter of Andra Mari street collapsed, immediately killing most of the 450 to 500 people who were there and burying the rest alive, who later died asphyxiated or burned. Numerous witnesses have made reference to the screams that were heard for hours, as the fire advanced in the direction of the shelter. Only four survivors have been registered, all of them placed near the entrances of the shelter.

If the town had been a military objective, and the civilians had been troops defending a fortress or a military stronghold, the machine-gunning would have kept them neutralized within the village's “circle of fire,” which would have allowed the infantry to advance without resistance and quickly take the ruins of the town by storm.

But it was a war experiment and, as Richthofen recorded in his diary, it was a great "technical success," since Gernika was completely destroyed and the population was kept immobile, within the perimeter of the town, during the three long hours that the attack lasted.

Following the logic of the terror bombing, the three regimes of the coup coalition asked within 24 hours of the bombing for the surrender of the Basque government and the Basque troops. However, the Basques did not surrender.